There’s an idea in literary criticism called the “death of the author.”

It’s not a literal death — just a very stark metaphorical distancing. It pretty much means that, when it comes to interpreting a work, the creator’s context and intentions should be ignored in favor of an interpretation of the text as it stands. There are certainly some works that benefit greatly from the inclusion of the author’s context, but there are flaws inherent in binding a work — any work — so tightly to its creator.

The concept was described by a French literary critic and philosopher named Roland Gérard Barthes, who felt strongly that keeping the interpretation of a text tied to the author’s biases was limiting, as well as innately flawed. By contrast, ignoring the author’s intentions freed the text to be analyzed and criticized entirely on its own merits and message, while erasing the issue of putting words in the author’s mouth.

It’s a thing that crosses art forms. Visual arts resist interpretation a bit more strongly than the written word (either fortunately or unfortunately, there is no OED for imagery. Unlike language, pictures don’t need to be mutually intelligible). Freeing an image from the creator means the meaning of a piece is left entirely up to what it is able to communicate to a viewer. At most, the interpretation of a piece in the context of the creator is only one of many facets of it. To (mis)quote Barthes, “a[n image’s] unity lies not in its origins […] but in its destination.”

I remember learning to read tarot. It wasn’t a thing that interested me much, initially — I liked runes, geomancy, Ogham staves, things whose imagery was far simpler, but contained multitudes. (And seemed to involve a hell of a lot less rote learning.)

But the trouble with learning to read tarot cards is that it feels like a lot to memorize. You have your deck, which, at first, seems impossibly thick. You have the little soft-cover booklet with its handful of keywords, or a short paragraph for each card. “The Three of Wands,” it helpfully tells you, “Progress, expansion, opportunity. Reversed: Delays, short-sightedness.” You might read this book, using the cards like flash cards to test yourself on the meanings. Finally, one day, you’ve achieved memorization. 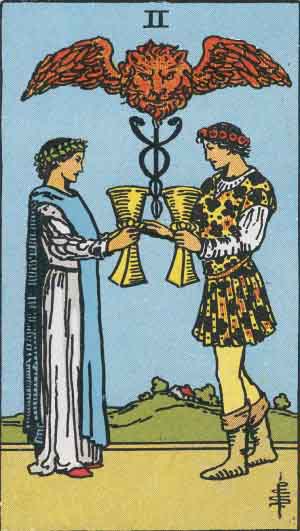 And then you get a new deck.

I want to preface this by explaining that I’m not suggesting that the traditional interpretations of tarot cards be thrown out entirely. Part of tarot’s enduring appeal is the universality of it as a means of self-insight, as much as divination. Those meanings endure because… well, they’re meaningful to us.
But there’s something to be said for burning that little book.

My S.O. didn’t read tarot when he met me. If you ask him today, he still probably wouldn’t consider himself a tarot reader, per se. But, between the two of us, we still have six decks — three apiece. One has beautiful imagery surrounding Nuestra Señora de la Santa Muerte, another is based on the works of Klimt, two others are animal-themed, yet another is based on the works of Mucha, one is full of strange, surreal moon-faced figures, and yet another is a joke deck I helped create to raise money for charity. All of them are tarot decks, with their Rider-Waite-Smith-inspired tableaux — The Fool, The Chariot, and so forth. All of them have subtly different meanings for their cards.

Reading tarot intuitively is a means of getting information without memorization, and it works because of the death of the artist. When you set the book aside, you free yourself to receive only what the artwork is giving you. The creation of a tarot deck is a deliberate act — every image is chosen or created with care based on the feelings it evokes, the ideas it conjures up, or its place in the visual language of alchemy. Allowing the artist to “die” frees us from adhering to the interpretations handed to us.

1 thought on “Death of the (Tarot) Artist”