I get a lot of use out of social media. Sure, it’s got its flaws. When you’ve moved around as much as I have, though, it’s a pretty useful way to stay in touch with the people who’re important to you. (Especially when your local postal service can charitably be called “unreliable.”)

Still, there’s something about it that makes me dread using it. Every scroll through my feed is a list of the worst headlines from the last news cycle, friends arguing, and edgelords edgelording, occasionally interspersed with pictures of kittens. It’s a lot to keep up with, and it amazes me how much mental energy it ends up sapping — and I don’t have that much to start with.

Stepping back from it really bothers me, though. Call it FOMO, I guess, or at least the fear of losing touch. But is it even worth it when it leaves me feeling drained and anxious within minutes, and most of the news stories I read are things I’ve read elsewhere? A lot of my social media is private, and I’m not exactly writing to an audience of millions — what does it matter if I like or re-post the stories my friends have most likely already seen? At what point does it become purely performative?

Mental energy is a precious resource for anyone, but I depend really heavily on it to pay my bills. If I can’t stand being online, I can’t write for my clients. If I’m too agitated to focus, I can’t make things. As obvious as that seems now, there was a long while where I didn’t realize it — it felt like that agitation and mental fatigue were normal. They were the cost of participating, or something I had to put up with in order to keep in touch with people and signal boost things I care about.

It seems like such a Millennial problem, doesn’t it? But with six states under my belt and my mobility restricted by my health, social media has become more important to me than it probably otherwise would have. On one hand, this isn’t entirely a good thing (otherwise I wouldn’t be fussing about it now). On the other, I can’t imagine how isolated I’d end up feeling otherwise. I like being somewhat itinerant. I’m an extrovert, and I thrive on meeting new people. The flip side to that is that it’s extra rough when I end up leaving them behind.

On a lark, I pulled a few cards from a tarot deck I recently picked up. I didn’t have any pressing concerns, just wanted to get a feel for the energy of the cards and see what they were like to read from.

“How can I put more into my art and writing,” I asked, “And get to a point where I’m more fulfilled creatively?”

And I got The Hermit. 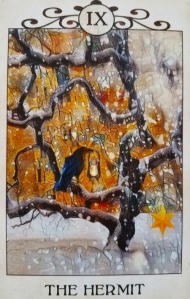 The Hermit is alone, but not lonely. This card expresses a need for introspection, a meditative period away from distraction. It’s dedication to a goal, and a solid understanding of the path that he is on. The Hermit has to turn inward first, before he can find understanding.

In other words, he needs to be the hell off of Facebook so he can learn a thing.

… Okay, so, in retrospect, this seems head-smashingly obvious. Still, on the tail end of about three entire minutes of Twitter, it really clicked for me. Putting myself through the wringer of reading, liking, and re-tweeting post after post about the worst the world has to offer isn’t really doing much good, even in a signal boosting sense. I don’t want to get all gift-shop-driftwood-plaque-with-the-word-“Breathe”-painted-on-it, but I need to stop this. It’s definitely not improving me as a person, and I don’t think it’s even really helping anyone else.

So, I’m experimenting with another social media hiatus. I’m still updating my Instagram and other strictly blog- and shop-related things, but I really need to figure out better ways to internet while maintaining my sanity.

Worked some sigil magic into a painting I did a while ago. Now I just need to figure out where to put it. 🤔 Acrylic and gold leaf on canvas panel.
She is well. Now a normal, healthy bb, other than that she will beg you for anything that goes near your face on the off chance that it *might* be food and becomes extremely floppy when she sleeps. She loves Pye to death, and he seems to be both baffled and very accepting of his new role as "non custodial fatherbuddyuncle."
Last night, we drove three hours round-trip to pick up this little nugget. She was found on the street on Halloween, sick and hungry, and taken in by some friends of ours. Vet appointment is Monday, so fingers crossed that she's able to make a full recovery. 💙💙💙 #catsofig #catsofinstagram #catsofinsta #cats #kittens #kitten #kittenlove #straycat #babycat #adoptdontshop
Bee butts, bee butts!
I found a yellow woolly bear in the lawn that's slated to be cut and smothered to make way for other (better) plants. I transferred them to a different plant a few days ago and hoped for the best, and it looks like it's working out. #caterpillar #bugs #butterfly #moth #nature #insects #naturelover #gardening #garden #flowers #plantsmakepeoplehappy #plantsofinstagram #plants
Pye has an obsession with paper. Six cozy places to sleep, but no. He will choose mail, trash, or projects that I'm *actively working on* every time.