October marks the best timing for one of my favorite hobbies: mushroom spotting.

(Not the fun ones. The regular ones.)

I usually have far more luck finding them in autumn than I do in spring or summer, so I was pretty excited when my partner and I drove out to Jug Bay to hike the trails around the wetlands. AND RIGHTLY SO.

Last time we went, I couldn’t walk as far as I’d’ve liked. This time, I was able to go a full 2.25 miles from the visitor’s center to… well, the visitor’s center, but the long way. (I’m also starting to get actual triceps, so all the recreational sledgehammer-swinging is paying off!)

The weather was absolutely perfect — sunny, breezy, and cool, with nary a cloud in the sky. We rarely saw another soul on the trails, but we had our masks so we could pull them on by the ear loopies any time we passed near anyone. Most of the trees were still green, though there were a few splashes of scarlet, saffron, and gold. Winterberries were abundant, lining the boardwalk beside the marsh with bright yellow-green leaves and shining red fruit. Asters, their white faces like miniature daisies, looked up from the side of the trail. Long, hanging stalks of goldenrod, bent under the weight of their blooms, and tall sunchokes seemed to catch and hold the light in their yellow flowers.

As we were walking along the trail, a butterfly fluttered up to say hello, made a loop around my legs, and passed back into the trees. It moved too fast to get a good look or a photo — judging by the color, I think it was either a red-spotted purple or a type of swallowtail. (And a late one, in either case!) I also spotted the most perfect spiderweb, threads intact and shimmering iridescently in the sunlight.

(Two crows hopped up on a parking sign in front of the car earlier that day, too, so this afternoon was just full of good omens!)

Turtles sunned themselves on logs, sleek heads occasionally poking up like curious periscopes. All around, you could hear the chorus of insects in the trees.

It was idyllic as fuck.

It wasn’t until we were close to the visitor’s center again that we spotted some mushy boys. Forest cryptid that I am, I got down on my knees and elbows on the trail, in the leaf litter, said a silent prayer to whatever deity’s in charge of urushiol, and crept as close as I could to get a few pictures. Identifying mushrooms is always dicey if you can’t check them for bruising, spore prints, and other signs that require more than a cursory examination, but they’re beautiful nonetheless!

(I believe the first is a kind of brittlegill, and the one at the top right is some type of gilled polypore. I’m not sure about the other two, but I really love the cream-and-brown one’s mossy home.)

I saw one mushroom that had been snapped off where it grew, so you could see its round butt and the little divot where it once sat nestled in the ground. Inside, the soil was lined with a silvery, cottony web of mycelium — the stuff that actually makes up the bulk of the fungus. I didn’t get a picture of it, but it was fascinating to see past the eye-catching fruiting bodies and into the “heart” of the mushroom.

We rounded the day off with crêpes from Coffy Café (I went with the Bootsy instead of my usual Mr. Steed — I think I might have a new favorite!), and a long, hot bath.

I’ve been trying to get more sun lately.

I think I probably get enough vitamin D, in the sense that I’m not technically deficient, but months spent indoors have given me the preternatural paleness of a consumptive Victorian heroine. On some people, this look works. My skin has naturally beige/green undertones, so I just look like I’m half iguana.

This past weekend promised to be sunny and warmish, so my S.O. and I packed up and went for a drive. Saturday was Lake Accotink, where we walked along the edge of the water, enjoyed the light for a bit, did some people-watching, then took a detour on the way home for cheeseburgers.

(By the bye, Big Buns Damn Good Burgers lives up to the name. If you get the veggie burger, though, get it as a burger bowl. It’s very good, but very soft and probably too skooshy to hold in a bun without it falling apart.) 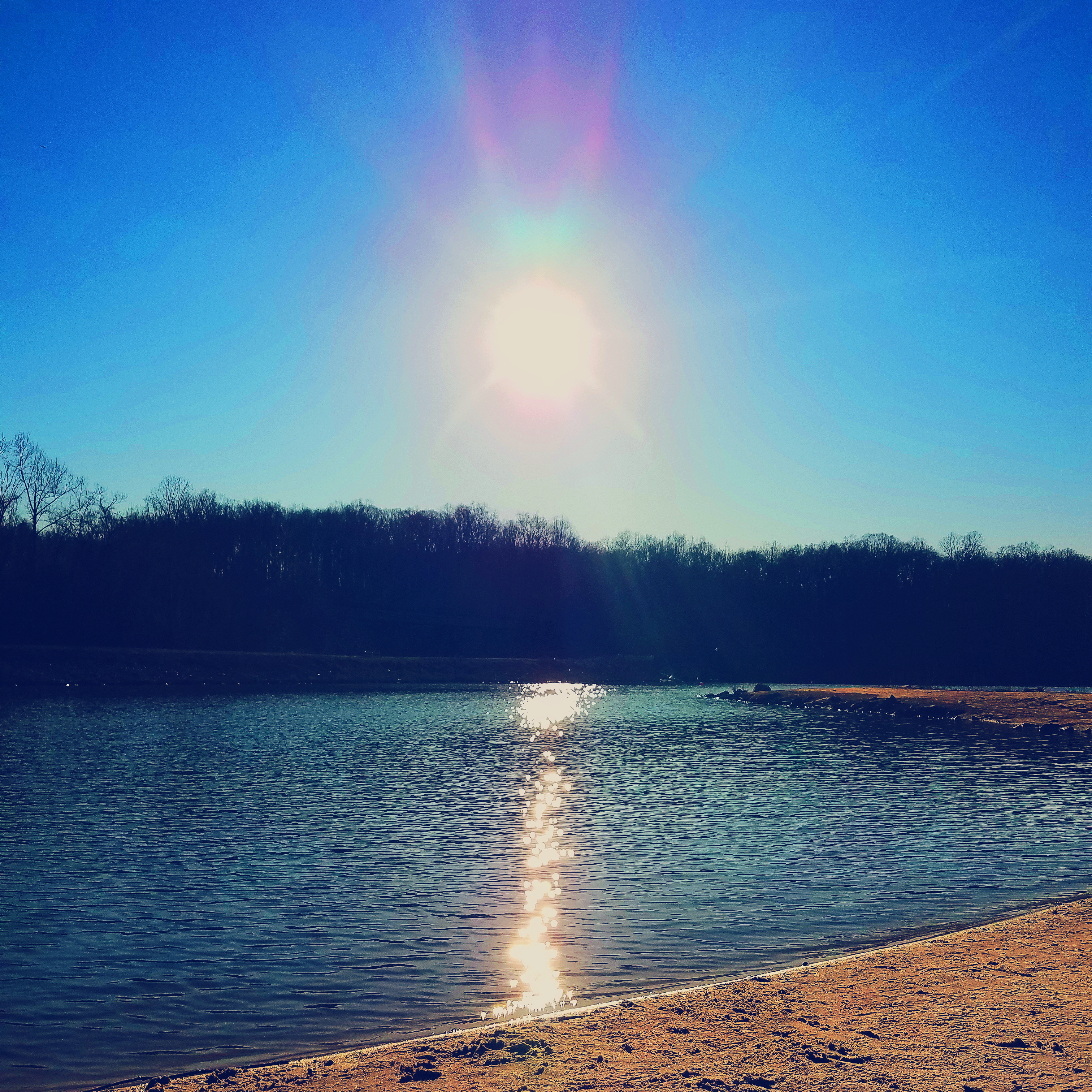 Even though the trees were leafless and the sand was chilly, the sun was warm and the breeze was gentle.

The next day, we decided to drive to the Arboretum. Most of the trees were still leafless, twisted branches scrabbling at the sky, laden with the remains of last year’s bird’s nests. Still, it seems like every time we go, we find something neat that we didn’t spot before — first the dogwood trees, then the path through the conifer specimens. This time, it was this beautiful Prunus mume, branches half-covered in fragrant, pink blooms, humming with honeybees. 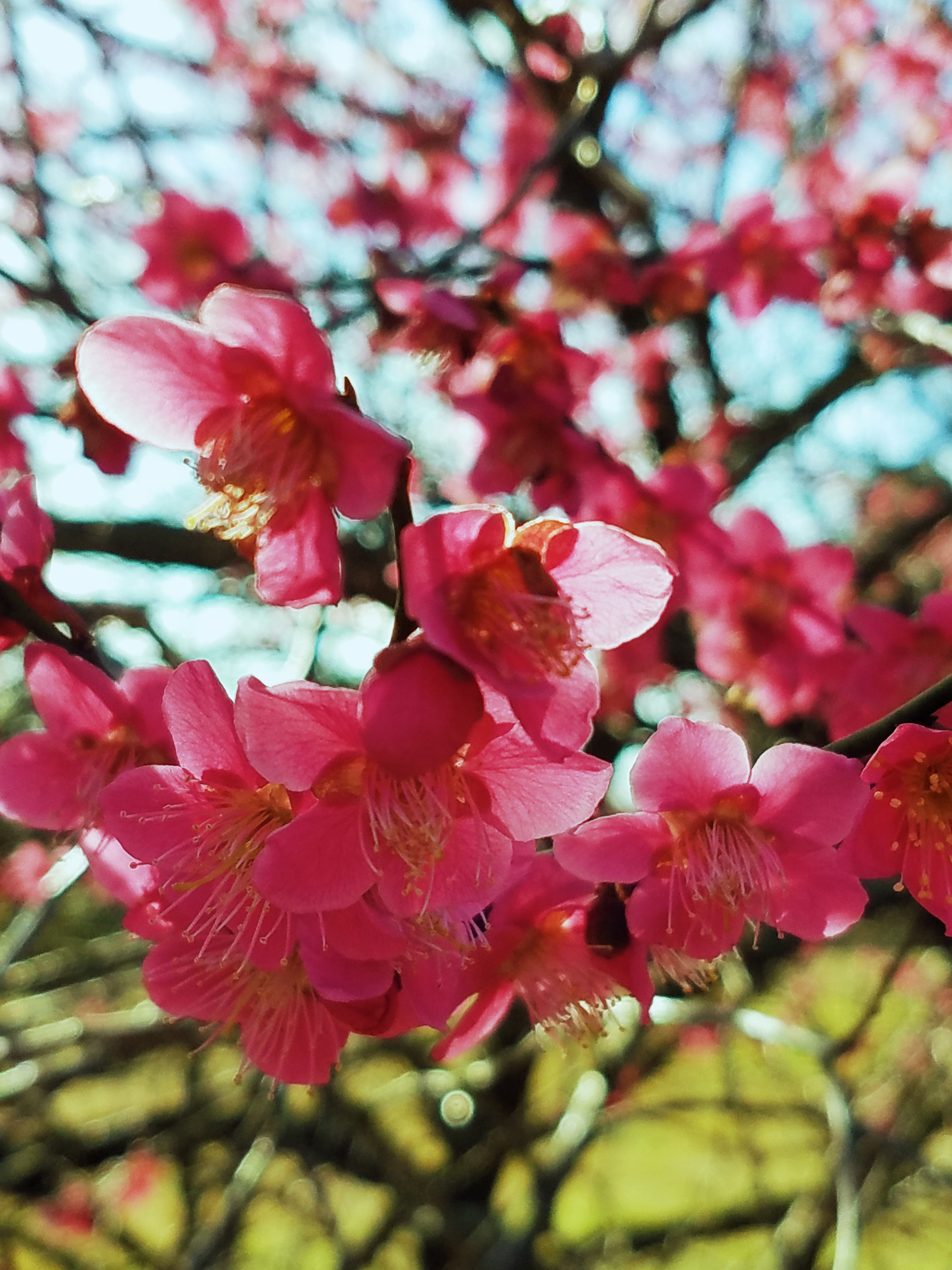 We wandered around until we found a bonsai museum and an herb garden — closed and bare, respectively, but the area was still beautiful enough. We found an arbor to sit under, which had this really cool-looking (albeit one I couldn’t identify) vine braided along one side.

With the sun slanting through the trees, backlighting the few leaves and flowers daring enough to open up this early, it was nice. Relaxing. 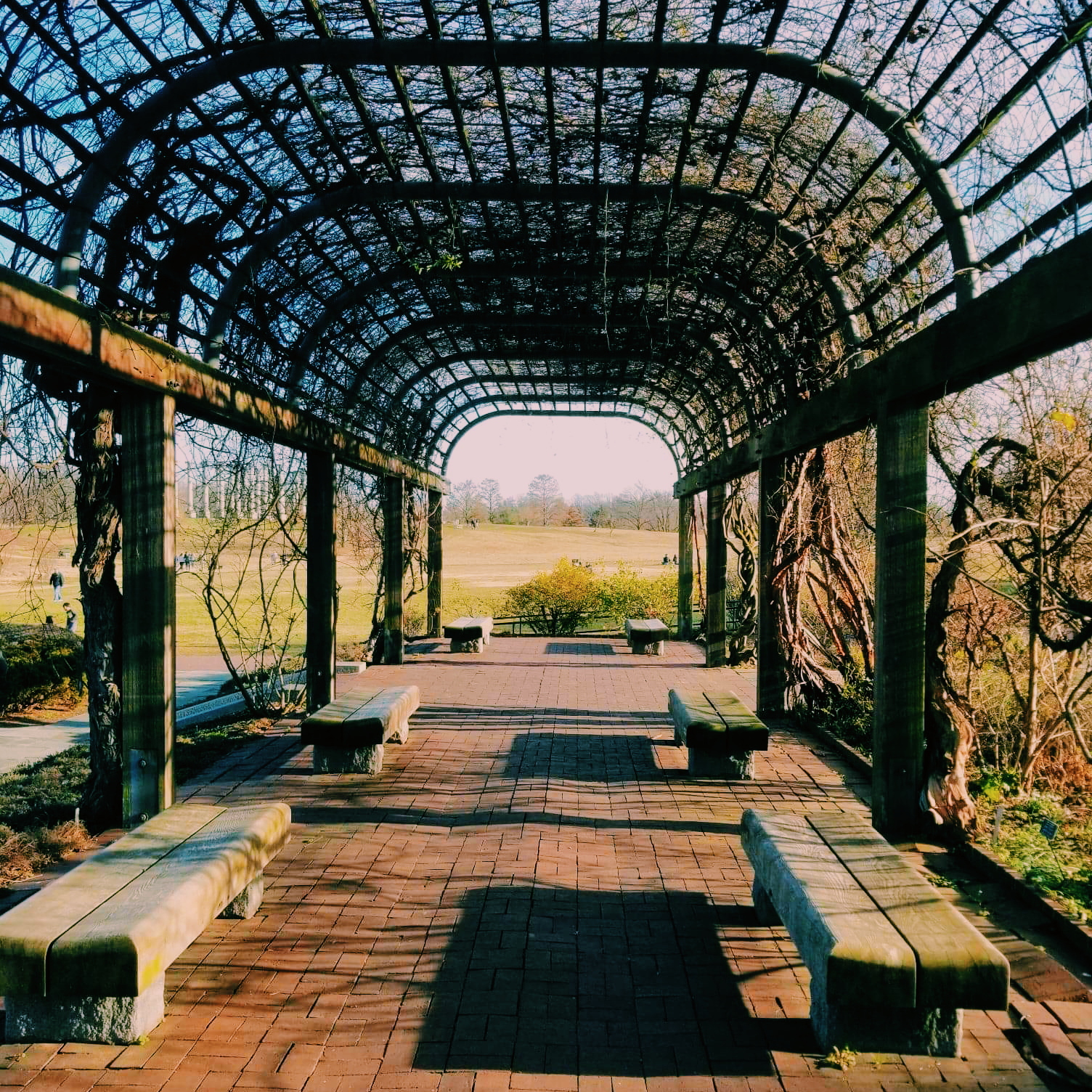 … Though maybe I should’ve waited for it to warm up a little before I buzzed my hair again. Whoops.

As we drove through the park, I heard my S.O. huff softly.

I turned my head and squinted in the light.

… I mean, he’s not wrong. I do not like the cobra chickens.

There are a lot of spots in the Arboretum that come alive with color in the warmer months. Bright splashes of orange, pink, and purple nestled into tufts and spikes of foliage, rosemallows the size of dinner plates, the works. There weren’t as many this time of year, but still plenty of color if you didn’t mind hunting for it.

… And also looking very strange while laying on your stomach in order to get close enough for a picture.

There were some very pretty crocuses, too, but they were a bit too far off the path for a picture (I’m not about to go trampling sensitive terrain for a pic or two, but, unfortunately, my zoom isn’t quite good enough for a clear shot). Next weekend’s probably going to be too cloudy and cold for more adventures like this, but that’s okay. I’ve got some other plans. Secret ones.

This week’s tarot card’ll be up tomorrow. Have a good Monday!