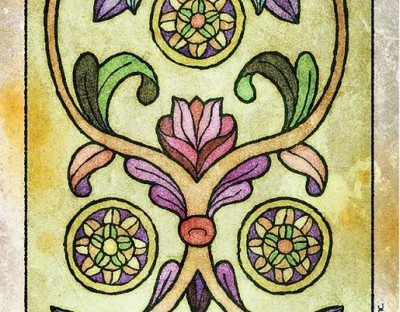 I admit, the first thing that drew me to the Tarot de Marseille was its visual appeal.

I spotted the Marshmallow Marseilles deck, and fell hard for the colors and imagery. It seemed a little daunting, sure — I’m experienced at reading your fairly standard interpretations of the Rider-Waite-Smith-inspired decks… But one with no illustrations on the pip cards?

I’ve talked a bit about how I interpret and familiarize myself with decks before, but it’s a technique that relies on there being images to interpret in the first place. This is something that Marseilles-inspired decks lack by design. Where the Rider-Waite-Smith deck was intended for divination, the original Tarot of Marseilles was a deck of playing cards. Still, I’ve never been interested in anything because it was easy, so let’s go!

Numbers, Cycles, and the Pip Cards

First, I’d like to briefly mention that there are a number of wonderful books on interpreting the Marseilles tarot. That said, I don’t have any of them, and wanted to try to see how the cards “felt” myself before engaging with someone else’s experience.

It seems there are two ways for me to go about interpreting the pip cards:

Not gonna lie, the first way involves way more memorization than I feel like doing. With a Rider-Waite-Smith-inspired deck, the images provide a visual cue. Without that, this angle seems, to me, to be more trouble than it’s worth. (Also not discounting the fact that I have access to plenty of RWS-inspired decks — if I wanted that kind of interpretation, I could easily use one!)

So that leaves me with the cards themselves.

Numerologically, there’s a lot going on here. Every suit has ten pip cards — the Ace through the Ten, the beginning through the end. Each suit is a cycle, easily divided up into smaller, three-card cycles within. The Ace to the Three, the Four to the Six, the Seven through the Nine, with the Ten as the ultimate culmination.

Interpreting the pip cards in the Tarot of Marseilles is an interesting combination of the meaning of the suit, the ideas suggested by the numbers themselves, and their position within these cycles. The artwork is completely decorative — there’s really not much information to be gained there, and the imagery is very consistent through each suit. The Five of Coins looks like the Three of Coins, just more of it.

Really, I kind of enjoy the freedom.

Interpreting a more art-based tarot deck is a fun challenge, but ultimately becomes a kind of find-the-hidden-image search. It’s a game of seeing what jumps out at you, what details you notice, and what meaning you can assign to them. Strength depicts someone wrestling with a lion, what meaning do lions have symbolically? Red is the color of passion, blood, and fire, how much red is in the artwork, and where? Are there alchemical symbols? Heraldic? On top of all of that, what overall “sense” do you get from the image?

Look at the III de Deniers, for example:

As the final card in the first cycle, the number following two, and three, specifically, Three is the manifestation of the creative joining of the Two. The pollen meets the ovum, the Two come together in a fertile, creative union, and the fruit, a third entity, is produced. As the suit of Coins, it’s the first manifestation of something monetary, economical, or physical — the result of the first effort represented by the Ace-Two-Three cycle. As the end product of the first cycle, it’s an encouragement to continue working hard and moving toward the ultimate goal represented by the Ten.

1 thought on “Learning the Tarot of Marseilles”