Note: This post contains some affiliate links. These links let me earn a small commission for each sale, at no extra cost to you. Thank you for helping to support this site, as well as rad people who make neat stuff.

After Pinrose chose to pull their Starter Witch Kit amidst a heap of (justifiable) controversy, it got me thinking.

“Self,” I says to me, “If you were going to put together a kit for a beginning witch, what would you put in it? If someone asked you to design the Starter Witch Kit, how would you have done it differently?”

And then I started brainstorming.

While I object to the attempt to use witchcraft as a way to sell perfume samples, I don’t necessarily see anything wrong with including perfume as a way to help beginning witches start to connect with witchcraft on a practical level and begin practicing regularly. I mean, I use perfume and cosmetics as part of my practice. Besides, just look at the origins of the word “glamour!”

So, if Pinrose had drafted me to come up with a kit for baby witches, here are the things I would choose instead of their sage/rose quartz/pastel tarot deck/perfume samples combo.

As someone who has taken part in smudging at every pow-wow I danced at, sage and I go way back. That said, it isn’t really part of my practice now — I prefer to fume with other herbs that I have a different relationship with. I’m also not really sure that a cleansing herb is necessarily the best choice here. Don’t get me wrong, learning to do that is important, but there are so many other ways to cleanse things/yourself/your house/your snotty room mate that it seems like a waste of a slot. If I were going to point a new witch toward my favorite herbs to work with, in general, I’d pick:

Cinquefoil. Also known as five finger grass, cinquefoil has as many virtues as it has “fingers.” It’s used in money magic, love spells, luck spells, travel magic, and for protection. For a beginning witch without a spacious herb cabinet, cinquefoil packs a lot of versatility (and punch) in one little bag. Get some wildcrafted cinquefoil from Harmony Hills Boutique here.

Clary sage. I love clary sage. It’s probably my favorite herb to work with. It’s calming, soothing, and good for divination and trance work. I’ve also used it for cleansing. Divination is a pretty key skill to learn (and not one that many beginners feel confident in) so I’m of the opinion that some nice, fragrant clary sage is a good place to start. Get some clary sage from Humming Ferns Botans here.

Mugwort. Mugwort is another solid divination herb. It’s also used for protection, strength, and healing — all things it’s good to develop some magical skill with. Get some organic mugwort from Harmony Hills Boutique here.

Rose petals. It’s said that rose can stand in for any flower a spell calls for. While not everyone agrees with that, they’re still really versatile. They really shine in love magic, but love magic encompasses a lot more than people give it credit for. Love magic aside, they’re also used for healing, protection, and divination. Give roses as offerings, infuse them in oil, burn them as incense, the world’s your oyster. Get some rose buds or petals in either red or pink from Harmony Hills Boutique here.

Rosemary. Similarly to roses, rosemary is said to be able to stand in for any herb. This is because, again, it’s really versatile. Love, protection, exorcism, purification, beauty, you name it. Rosemary is also very easy to come by, and this ubiquity means it’s helpful to develop a strong working relationship with it. Get some organic rosemary from Harmony Hills Boutique here. 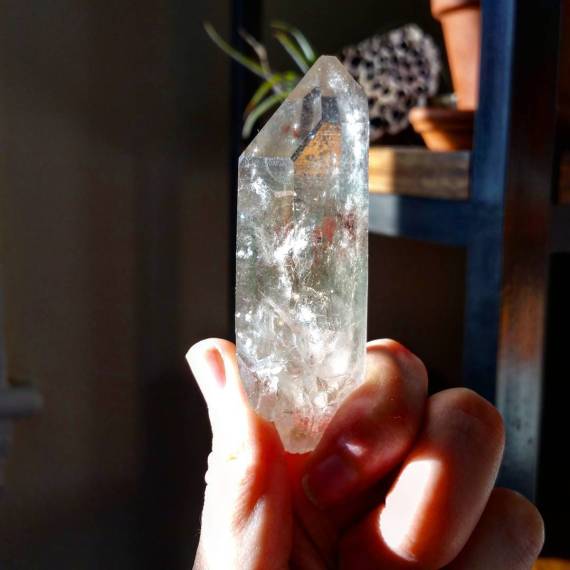 I mean, rose quartz isn’t bad… It’s just very obvious that it was only chosen to match Pinrose’s pastel tarot deck. Boooring. If I had my way, I would’ve picked:

Clear quartz. It’s clear, it’s pretty, it’s inexpensive, and it can be used for basically anything. It’s also available in the U.S., so obtaining some doesn’t have to cost a child laborer their eyesight. Pick up a clear quartz from Bliss Crystals here.

Lodolite. Lodolite is basically clear quartz +, and is found in all of the same places. It should be noted, though, that “lodolite” is kind of a meaningless term — it just means mud stone, and isn’t really an actual, scientific term. That’s why you’ll often see it called things like garden quartz, scenic quartz, inclusion quartz, shaman quartz, or named by its particular inclusions (chlorite quartz, for example). Anyway, with that out of the way, lodolite is an excellent meditation aid. The best specimens can look like they have entire tiny forests inside, or swirls of minuscule galaxies. Hold one and stare into it long enough, and you’ll see where it takes you. Pick up a tumbled lodolite from Gem Realm here.

Amethyst. Amethyst is good for divination, relaxation, mental magic, dream magic, and lots of other things that involve calming yourself and cultivating mental discipline. As I mentioned previously, this is something that can be challenging when you’re first starting out — amethyst can help. Pick up an amethyst from Bliss Crystals here.

Black Tourmaline. Black tourmaline is a great stone for grounding, which is something that’s often overlooked. It’s not as exciting as other magic, but it’s probably the most important skill to pick up. It’s also used for luck and protection, two things pretty much anyone can use more of. Pick up some black tourmaline from Bliss Crystals here.

Citrine. Citrine is another variety of quartz, but it’s not as easy to find as it might seem. There are a ton of inexpensive pieces of citrine on the market — unfortunately, most of them are pieces of low-grade amethyst that has been heat treated to give it a yellow-orange color. This isn’t to say that baked amethyst isn’t any good, but it isn’t exactly citrine. Citrine enhances joy, brings luck, and clears negative energy. I know a lot of tarot readers who keep a piece with their cards. Pick up a natural citrine from Bliss Crystals here.

Okay, so. We’ve got an herb, a crystal, now for the deck. I feel like I’ve talked about divination a lot here, but that’s because it’s something that’s really important to me and my practice. Divination is more than just trying to predict the future — it can tell you a lot! If I were choosing a tarot deck to show a newbie, I would choose:

The Rider-Waite Tarot. Okay, this is not necessarily the most exciting choice, but that’s why I picked it. The RWT is pretty much as close to a bog-standard tarot deck as you can get, and, until you’re at the point where you can intuit card readings, interpret artwork, and so forth, it’s helpful to get used to using it. A lot of sites and guides to tarot card meanings are based on this deck. Here’s some more information on the Rider-Waite tarot deck.

The Deviant Moon Tarot. I’m not gonna lie, I completely picked this one just because I like it so much. I use it all the time. The artwork is strange and wonderful, and I love the odd world in it. It’s also not too far off from the RWT in terms of how the suits and trumps are depicted. It’s a beautiful, strange deck with a dark feel, and I’ve never gotten anything but helpful, perceptive readings from it. Here’s more information on the Deviant Moon tarot deck.

The Animalis Os Fortuna. I use this deck in a religious context, because the animals used in its imagery lend it an added layer of meaning. Not only does a card have the meaning it typically does in a standard deck, but there’s also the animal to consider — the cunning of a fox, the wisdom of an owl, whatever it is manta rays are good at. For this reason, it’s a helpful deck for learning to interpret cards intuitively, and for divination outside of tarot’s usual scope. Purchase the Animalis Os Fortuna deck here.

I have a lot of perfume. Like, close to an embarrassing amount of it. I love it, and I don’t know what I’d do without it. Scent evokes memory, changes mood, and creates an atmosphere. With that said, if I had to pick a suitably witchy perfume, I’d pick from:

Standing Stones by Red Deer Grove. Standing Stones is another woody fragrance. It has notes of balsam, cedar, dragons blood, cardamom, bergamot, and musk, among others. It has an almost smoky, incense-like character, and is one of my favorite unisex fragrances. Purchase Standing Stones here.

November in the Temperate Deciduous Forest by For Strange Women. Somehow, For Strange Women has managed to perfectly capture the smell of a forest in autumn. It has notes of black tea, bergamot, mushrooms, soil, and dried leaves. This scent has a very pleasant earthiness, offset by the bergamot and faintly spicy smell of autumn leaves. Purchase November in the Temperate Deciduous Forest here.

French Oakmoss by For Strange Women. Oakmoss is a power herb, and this perfume uses it to good effect. The dry earthiness of the oakmoss is offset by the clean scent of lavender, and the fresh green of moss. I like to wear this one while meditating or doing spellwork — the scent is subtle, but powerful. Purchase French Oakmoss here.

And there you have it, a build-your-own Starter Witch Kit, pretty much guaranteed to fit your needs better than a perfume company’s marketing ploy.

Worked some sigil magic into a painting I did a while ago. Now I just need to figure out where to put it. 🤔 Acrylic and gold leaf on canvas panel.
She is well. Now a normal, healthy bb, other than that she will beg you for anything that goes near your face on the off chance that it *might* be food and becomes extremely floppy when she sleeps. She loves Pye to death, and he seems to be both baffled and very accepting of his new role as "non custodial fatherbuddyuncle."
Last night, we drove three hours round-trip to pick up this little nugget. She was found on the street on Halloween, sick and hungry, and taken in by some friends of ours. Vet appointment is Monday, so fingers crossed that she's able to make a full recovery. 💙💙💙 #catsofig #catsofinstagram #catsofinsta #cats #kittens #kitten #kittenlove #straycat #babycat #adoptdontshop
Bee butts, bee butts!
I found a yellow woolly bear in the lawn that's slated to be cut and smothered to make way for other (better) plants. I transferred them to a different plant a few days ago and hoped for the best, and it looks like it's working out. #caterpillar #bugs #butterfly #moth #nature #insects #naturelover #gardening #garden #flowers #plantsmakepeoplehappy #plantsofinstagram #plants
Pye has an obsession with paper. Six cozy places to sleep, but no. He will choose mail, trash, or projects that I'm *actively working on* every time.